The appearance of pork on restaurant menus is becoming increasingly prevalent, and that is creating strong revenue opportunities for independent meat processors that provide foodservice operators with insightful preparation and merchandising advice and a wide range of high-quality cuts. 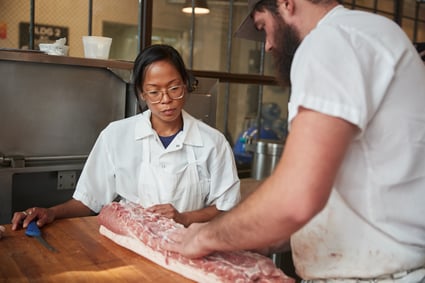 Indeed, 62.4 percent of restaurants were offering pork options in 2018, a 5 percent increase from 2014, and pork is forecast to be on 64.4 percent of menus by 2022, reports Datassential, a Chicago-based market research firm. Datassential projects the pork growth rate to outperform 87 percent of all other types of foods, beverages and ingredients over the next four years and notes that 71 percent of consumers indicate that they either love or like pork.

Pork belly and pork shoulder primals, both the picnic and the butt cuts, are contributing to the overall growth, with fast casual, quick service and fine dining restaurants registering the strongest increases in pork items.

Among the newer options that launched in April is the Porkiyaki Burger at Red Robin, which is a ground pork patty glazed in teriyaki sauce with pickled carrots, red onions, crispy onion straws, roasted garlic aioli and shredded romaine.

Also in April, Bonefish Grill rolled out Smoky Mezcal Tenderloin consisting of mezcal marinated pork tenderloin grilled with three jumbo shrimp and roasted vegetables. In addition, Taco John's in March introduced its Carnitas Quesadilla Taco, featuring a quesadilla shell with melted cheese between two grilled tortillas on the outside, and pork carnitas on the inside.

Processors can become more valuable by advising customers on the items that are most likely to resonate with consumers, while supplying top-quality and innovative cuts that are easy to prepare and handle well under a wide variety of conditions and applications, says Maeve Webster, president of Menu Matters, an Arlington, Vt.-based food industry consulting firm. Such cuts could be appropriate for entrees, appetizers, side dishes, snacks and a host of ethnic recipes.

"Culinary innovation is a great way to support foodservice outlets that lack strong back of house operations," she states. "Processors also can instruct restaurants on how to best prepare and handle pork, and on the ways pork can be used in meals," which includes noting that 145 degrees Fahrenheit is a safe cooking temperature for raw pork and that it also is safe to serve pork that has a little pink color.

Providing selections that require little labor or skill to prepare and will enable restaurants to cut operating expenses also can be a significant differentiator, Webster notes.

Because most processors are selling commodity pork with standardized genetics, suppliers that are able to offer valued-added selections, such as partially prepared pork or items that just require reheating, will further distinguish themselves, says Jim Wisner, president of Wisner Marketing Group Inc., a Lake Forest, Ill.-based retail consultancy.

"It is important to help foodservice operators become more profitable by looking at what can be done from a culinary or meal development standpoint," he states, which includes suggesting and supporting dishes that require less preparation and can generate higher margins.

Selections with better for you claims, such as naturally raised and organic, along with products that were developed with a focus on animal welfare, are other key differentiators, says Keith Belk, a professor and head of the Department of Animal Sciences at Colorado State University in Fort Collins.

"More foodservice outlets are catering to the growing proportion of consumers who have expectations in those realms," he notes.

Suppliers that offer additional pork options that differ from the standard commodity lines are demonstrating to current and potential restaurant customers that the processor "is not content with where they are today," says Kari Underly, principal of Range Inc., a Chicago-based fresh meat consulting and training firm.

Processors, she notes, should continually seek to make their selections more appealing to customers. That can include searching for different genetics to introduce into the herd, while supporting restaurants that cut fresh pork on site by providing different sizes of hogs or deboning the whole hog for sausage; and offering a curing box with commonly used cuts, such as legs for prosciutto, shoulders for coppa and bellies for pancetta or bacon.

In addition, suppliers can provide meat cutting training to their foodservice customers and have the operators visit the processors' facilities to view raising practices and learn how it affects product quality, she states.

"Tell your story," Underly adds. "It can come from the processor's sales force, social media strategist or by partnering with an influencer who can discuss how using the processor's products has changed their menu or how the pork is different from the rest."

When processors provide uncommon value and cuts to foodservice operators, they’re gaining a strong advantage in the foodservice market. By breaking free of what’s common and promoting innovation that goes beyond what’s expected, they can give operators a greater chance of reaching consumers in ways they never have before. With its continual growth and increasing popularity, there seem to be few ingredients more capable of achieving this goal than pork. Going above and beyond to encourage operations to include pork in creative new dishes on menus adds value to processors’ services and allows both parties to grow alongside a trend that shows no signs of slowing down.