5 Pork Trends that Can Transform Your Menu—Without Multiplying Costs 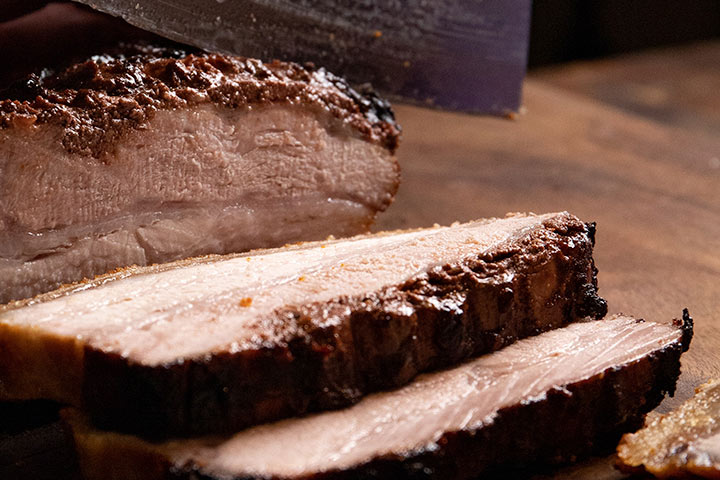 In recent months, numerous restaurants have struggled with labor and supply chain constraints.

Roughly 70% of operators don’t have enough employees to support consumer demand; and 96% have experienced key food and beverage item shortages—which can make offering a menu that piques customers’ interest challenging.

For some, utilizing versatile proteins that can be served during multiple dayparts—and easily modified using sauces, spices and different cooking methods—may be the answer.

“Restaurants have pared down their menus, so what’s left has to be exciting—interesting textures, stronger flavors and elements that are a little more provocative,” says Suzy Badaracco, president of food industry think tank Culinary Tides. “It’s about being smarter with the items you’re bringing in—choosing multifaceted items that can go in this dish and that dish and so on.”

To diversify their menu, operators can tap into some of the following hot dining trends—which will allow them to regularly add SKUs without incurring hefty additional labor or ingredient costs.

U.S. consumers are craving international fare; according to a 2022 survey produced by the American Culinary Federation and Technomic, global fare dominated several categories, including hottest culinary trends, trends by daypart, and trends by meal part.

Pork’s familiarity, coupled with elements customers haven’t had before, can be an enticing proposition.

“Most people forget that pork is the largest global protein and dominates dishes in other countries,” says Chris DuBois, senior vice president of the protein practice at IRI, a market research provider. “It’s a natural platform for experimentation. When pork is next to goat, oxtail and other meats, these menus position pork in a new way for a lot of consumers.”

Which could boost business—Cuban sandwiches, moo shu pork and Korean barbecue are some of the top-scoring foods consumers say they’d rather get from a restaurant than make at home, according to Mike Kostyo, a trendologist at Datassential.

“If you want to entice consumers out of their homes, or at least to order delivery from foodservice, put one of those on the menu,” Kostyo says.

Other prepared pork products can also help operators meet the continued demand for takeout and delivery—which more than half of adults (54%) say are an essential part of the way they live.

“Delivery and to-go options continue to grow,” DuBois says. “Pulled pork holds together well during transport; it also performs well in bowl offerings where it is an anchor ingredient.”

While pork ribs, according to Kostyo, are the most popular type of pork entrée on menus, pork belly is the fastest-growing option used in dishes, showing a 47% increase in use in the past four years.

“Pork belly is currently having a moment on a lot of menus,” DuBois says. “I’ve seen a growth in menu callouts as an inclusion, such as with Brussels sprouts, and it also makes a fun appetizer. Because pork belly can take on sweet and savory flavors, it can add major excitement to a menu.”

Some operators are also utilizing pork in innovative configurations of familiar menu items. One of Washington, D.C. eatery Ghostburger’s two locations, for example, offers a chorizo sloppy joe; in mid-2021, Florida-based chain Hurricane Grill & Wings introduced pork wings that are made from pig shank, instead of chicken.

Bacon—particularly smoked and applewood-smoked varieties, which are the top types mentioned on menus—remains a consistent breakfast favorite. It doesn’t have to be limited to just early-in-the-day dining, however.

In recent years, salty strips have popped up in a vanilla-and-maple milkshake at IHOP, a jam used to top a burger at Sonic Drive-In and other unexpected places.

“Bacon has been an amazing growth driver for pork over the last 20 years, and just when you think people can’t eat any more bacon, they find a way,” DuBois says. “While bacon in ice cream isn’t new, bacon as an ingredient in dessert offerings continues to expand.”

Protein is an integral part of popular eating plans like the keto diet, which was one of the top five diets Americans followed in 2021. Certain cuts of pork—such as tenderloin, which is leaner than chicken—can help satisfy diners’ desire for healthy menu options. Nearly half (49%) of consumers said they planned to order healthier delivery food in 2022.

“Our research has consistently found that when leaner pork cuts are offered, they drive sales,” DuBois says, “Consumers think about fat ratios in meats, and specific callouts on menus for lean options make a difference.”

Consumers have also increasingly expressed an interest in foods made without growth promotants and artificial ingredients. Given that 60% believe livestock antibiotic use can lead to resistant bacteria that can make people sick, stating that no antibiotics have been administered to animals and using terms like “all-natural” and “vegetarian- fed” may add to menu items’ sense of appeal.

“Consumers want to know what kind of food they’re eating and where their food is sourced from,” says Clemens Food Group Corporate Executive Chef Jenny Moyer Murphy. “That has to be really clear on your menu.”

The amino acids and other nutrients pork provides—along with its adaptability as an ingredient—can also be a major menu asset. Ultimately, whether you incorporate cuisine from another country, a bacon-infused appetizer or something else entirely, using pork in dishes can help you increase your total amount of offerings, without adding sourcing or labor concerns—allowing you to serve high-quality items in an effective way and keep both customer service and satisfaction high.

Learn more about leveraging the power of pork by downloading our playbook, Make the Most of Your Menu: Trends, Tips & Tricks for Innovation.